Many audiophiles take it as a given that vibration/resonance on our audio equipment is bad for sound quality, thus we see the proliferation of isolation platforms, cones, spikes and other whatnots, all aim at either preventing vibration from reaching the equipment and/or draining vibration energy away from the equipment. The absence of vibration/resonance, e.g., from overdamping the equipment, though, presents another set of negative effects, overdamping in my experience blunts the attack in the music notes, slows down the sound, and blurs the details. So, given this dichotomy, the approach required of the hifi enthusiasts, I believe, is to select the isolation scheme that most suits his system and/or his taste in sound. Dealing with vibration/resonance has become a field comparable to the audio cables arena, with diverse philosophies, approaches, tools and dare I say, price points too.

I have a personal experience where equipment isolation had helped me solve a problem in my system. The problem was a certain congestion and thickness in the upper bass / lower mid region, which I thought was caused by the acoustic character of my listening room. The problem was not too serious but since I had detected it, it stuck out like a sore thumb. I tried diffusion, I tried absorption, and I tried putting those acoustic treatment materials with different configurations at different spots in my listening room. No matter what I tried I could not get rid of that sonic character. One day, on a hunch, I got myself a pair of Finite Elemente Signature amp stands, and moved my monoblocks, which all this while had been sitting directly on the parquet floor of my listening room, onto them. Voila!  The sound opened up and the problem disappeared! To be honest, I was a little dumbfounded by the solution but also glad that I have learned this lesson in equipment isolation.

Coming to the focus of this writeup, Thixar is a new German company offering hifi equipment isolation products in the form of rack, platform and feet. It even has an active isolation platform, called the Silencer, which needs to be plugged into a power outlet, it will monitor the disturbances coming in from the surroundings, and its active damping system will do the necessary suppression to cancel off the disturbances and preventing them from affecting your equipment.

Thixar’s local distributor, AV Designs, provided me with 2 simpler products from the Thixar range. One is the Silence platform and the other is a set of 4 footers called Silent Feet. 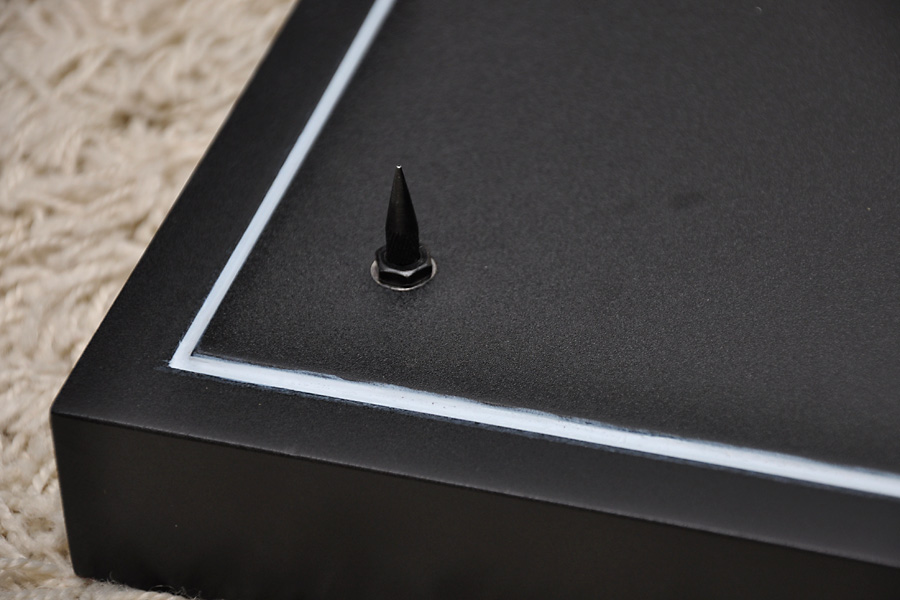 The underside of the Thixar Silence platform. Note the white compound which is a special gel used to glue the bottom plate to the top frame, giving a ‘floating platform’ construction

I started with the Thixar Silence platform. Outwardly, it looks like a thick piece of MDF board, but that is deceiving, the devil is actually on the underside. Flipping the platform over, you’ll see that it is actually a 2-tier design. The top part of the platform is a frame, which is a slim rectangular board that is hollowed out in the centre and thus without a bottom, then a flat piece of board slightly smaller in area is glued into the frame using a special vibration damping compound, to serve as the bottom plate. This bottom plate has screw holes for spikes to be installed if you so desired. Essentially, the top plate becomes a “floating” platform since it does not touch the bottom plate at all.

I decided to try the Silence platform under the separate power supply unit of my TAD-D600 disc player and the audio circuitry unit of my Pass Labs XP-20 pre-amp. My TAD-D600 power supply unit was originally placed on a thick wooden block supported by 3 pieces of FE ceraballs underneath. I got to say that aesthetically, the Thixar Silence platform looked much better and more professionally finished.

The change in sound quality with the Thixar Silence in place was a subtle one, but audible. It essentially made the highs a little more silky smooth and a little more polished.

I could not detect further effect on the TAD-D600. A sign that TAD had sorted out any vibration/resonance issue perhaps? That may be the case given the TAD-D600’s massive construction. I decided to move on to the pre-amp. 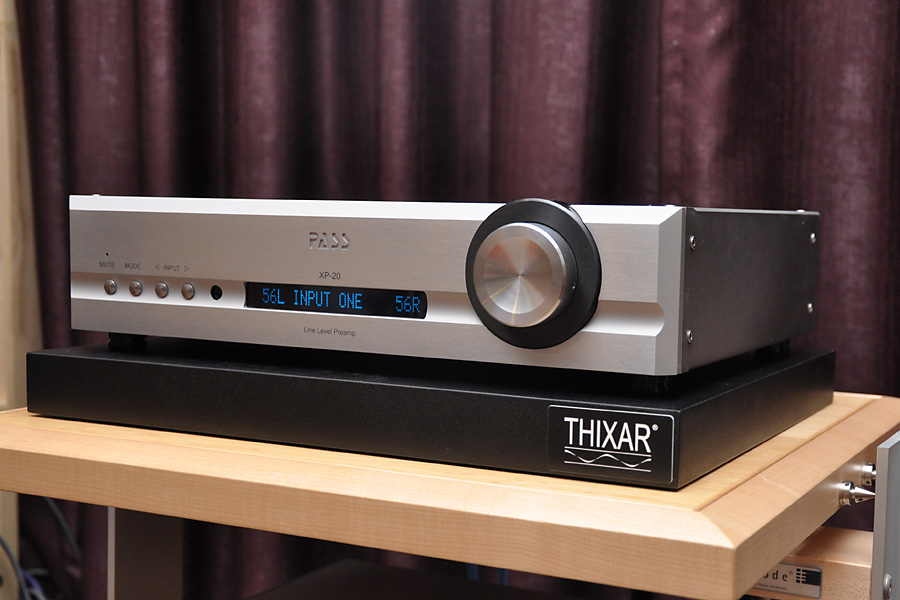 The Pass Labs XP20 was already placed on a Finite Elemente Signature rack, but adding the Thixar Silence evinced a more audible change. Violin tone and vocal became a tad richer, the overall sound quality especially the highs became smoother. Double bass notes could be heard cleaner and better defined. Soundstaging was more stable with better focused image outlines. Energy in the music presentation seem to turn up a notch, putting a little more excitement into the listening experience, though on some music I could sense a bit of aggressive edge to it. For the last bit, I suspect it might be due to the double effect from combining the FE rack and Thixar together, and if given time I would attempt further tuning to dial out this character.

I would say that if you suffer from some harshness and brightness in the highs or a rough texture in your sound, the Thixar platform should be a good isolation product for you to check out. I liked the fact that the Thixar Silence platform gave out these benefits without making the music sound dull or slow. 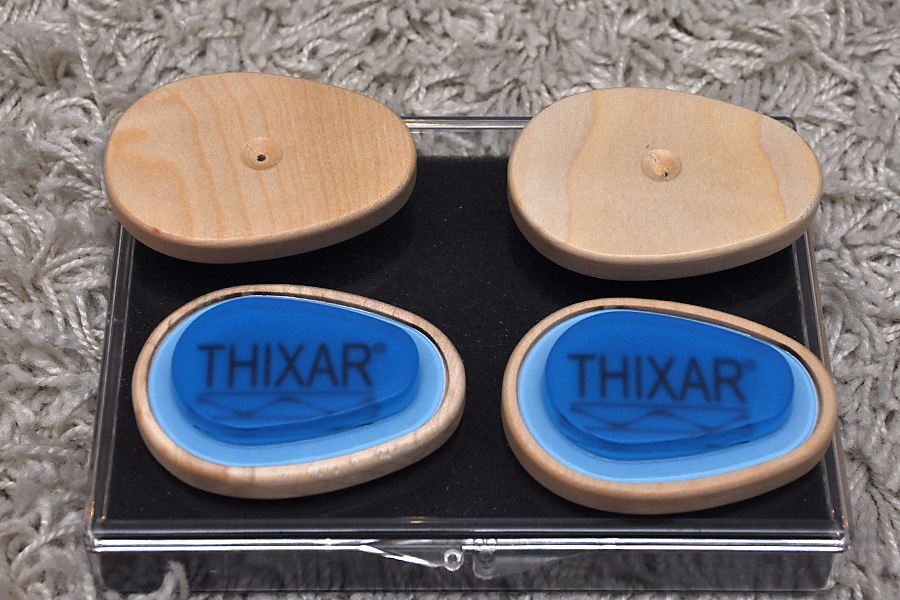 Let’s move on to the Thixar Silent feet footers. The Silent Feet’s design is basically a piece of flat solid wood with an egg-shaped cross section mated to what Thixar claims to be a high-tech gel pad. I quote Thixar’s website on the following benefits from the Silent Feet:

“1. The top plate is enough to fit spikes and other equipment feet and absorbs occurrent vibrations.

2. The form and material of which have been selected in such a way that they damp vibrations, while their asymmetric shape simultaneously eliminates the emergence of standing waves because of a non parallel design.

3. The structure and design of these gel pads result in high flexibility to absorb vibrations instead of transferring them to your equipment.” The Silent Feet comes in a set of 4. I tried them underneath my Pass Labs XP20 pre-amp in 2 ways. First, I used the Silent Feet to support the preamp chassis directly. Second, I placed the Silent Feet under each of the pre-amp’s own feet. I liked the second method better, as the sound was slightly incoherent using the first method. With each one of the pre-amp’s feet resting on a Silent Feet, I heard the same smoothness and richness on the overall sound, and a more stable soundstage as when I was using the Silence platform. The effect of the Silent Feet on the highs was relatively more pronounced though, in addition to smoothening the highs it also seem to dial the brightness level down a tad, making music sounding somewhat warmer. Transient attack was reined in a little, giving the feel of a calmer sound.

I believe the Silent Feet will be very effective in taming a bright and rough sound. If that’s what you are suffering from, they are definitely worth investigating.

I believe Thixar offers an effective alternative in hifi equipment isolation. Do check them out!