By TE Tan
Many audiophiles had reported that the sound quality from their systems fluctuated according to the electricity supply quality at different time of the day. For example, if one’s house is situated close to an industrial area, the sound quality at night and on weekends is purportedly better because the factories are not operating.

My experience is similar but in an opposite manner. I feel that my system sounds better during day time but worse at night. My house is in a residential area, there isn’t a factory to be seen in the area, so I put the sound quality difference down to the possibility that, at night, when the neighbours come back from school and work and start to turn their electrical appliances on (fluorescent lights, tv, air conditioner etc..), the quality of the electricity supply suffers. I am pretty sure that this sound quality deterioration is not caused by voltage fluctuation, because I measured voltage range (over a period time during my listening sessions) of about 238v to 245v most of the time. So the sound quality must have been affected by the general grunge and interferences in the electricity supply. This was dramatically confirmed with a borrowed Audioprism Noise Sniffer. The built-in loudspeaker was wailing when inserted into a wall outlet in my house in the evenings but was just whispering in the day time on weekends. 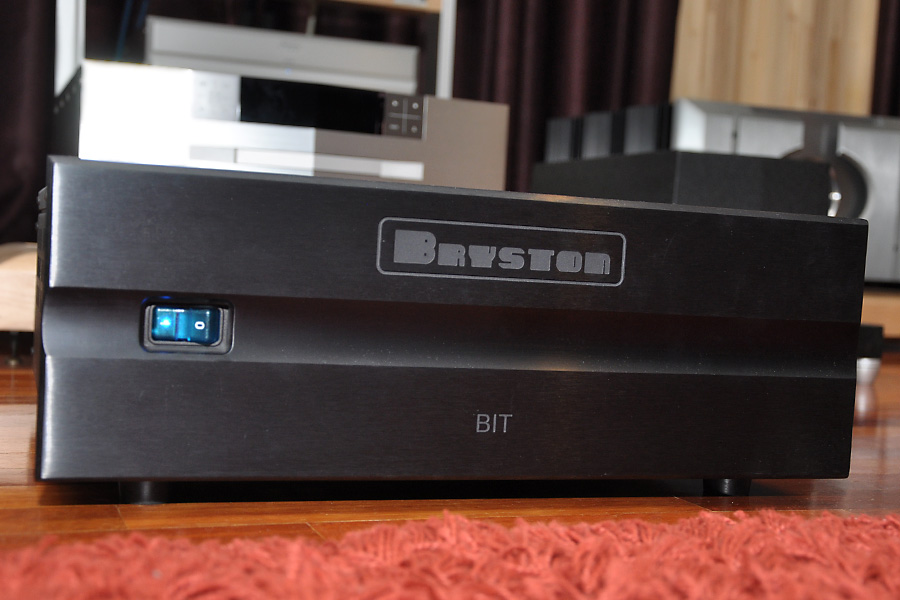 So, it was under this backdrop that I tested the Bryston Isolation Transformer (BIT). The Bryston BIT should be familiar to any audiophile who knows Torus, the company that builds power line conditioners for hifi with the isolation transformer approach. The Bryston BIT is basically a re-badged Torus, the Torus logo can be seen at the back panel of the BIT unit, as seen in the photo below. Willy Low and me tested the Torus RM8A model a few years ago in our systems and came away pretty impressed. So when the Bryston BIT presented itself I was not going to let it go by.  The Bryston BIT version that I collected from AV Designs is the same 8 amp version. However, the Bryston BIT differs from the Torus model in a fundamental way – the BIT now comes with American style outlets as an option (and there are 10 of them to boot), whereas the Torus of yore available here was strictly British style power outlets only. The new BIT suited me fine as all my powercords could be used with the BIT without resorting to adaptors, which every audiophile knows are detrimental to sound quality. So, Malaysian audiophiles who use powercords with American plug, rejoice! Now you can add Bryston BIT to your power line conditioner shortlist. The heart of the Bryston BIT is a massive isolation transformer, sourced from Piltron, which performs the power line filtering and cleaning function by acting like a wall between our house’s electricity supply and the hifi equipment. Bryston cites the following benefits from the BIT:

The BIT is one heavy power line conditioner, weighing in at 34kg / 75lbs. The Bryston BIT requires a 20A IEC connector, not the 15A type normally required for our hifi equipment (see the BIT’s inlet socket in the photo below). My hifi equipment consists of a pair of Pass Labs XA160.5 class A monoblocks which consume 600w each continuous, a Pass Labs pre-amp which consumes 25w and a TAD SACD/CD player which requires 32w. In total, my equipment requires a little over 5 amp of current to run, so I am within the power delivery capability of the Bryston BIT. Indeed when I plugged all of them into the BIT and switched them on, there was no drama, everything was just functioning normally.

With the Bryston BIT in the system, the first thing I wanted to ascertain was whether I could run my monoblocks from the power line conditioner with no sound quality penalty– I preferred to have my Pass Labs XA160.5 monoblocks plugged directly to the wall instead of into my old Shunyata Hydra 8 power conditioner, they sounded more open, faster and more dynamic that way. With the XA160.5 plugged into the Bryston BIT together with everything else, I heard the improvement in the form of a smoother and less gritty sound at night, but there was also a slightly darker top end and a somewhat gentler attack in the music compared to what I was used to but which I preferred, so no luck for me there. Bare in mind that my monoblocks are class A and they suck 1200w continuously, a smaller or a class A/B amplifier will definitely not put up as big a demand. I need the bigger Bryston BIT (the 16A model) for the job.  Anyhow, at the end of the day I decided to leave only the preamp and SACD/CD player plugged into the Bryston BIT and soldiered on.

The BIT passed my first requirement – that the sound quality difference between day time (good) and night time (bad) be diminished to insignificant level or none at all – with flying colours. Well, the difference did not go to zero (I suspect because my monoblocks were still plugged directly to the wall), but the difference did reduce very significantly. The 2 issues of really-bad-electricity-nights, i.e.,  the glare and harshness in the highs and upper mid (such as that from a trumpet played with a mute), and the less well controlled bottom end (such as double bass notes) did not rear their ugly heads when the BIT was in my system. So the Bryston BIT was truly effective in preventing the grunge in electricity from reaching the equipment.

On top of that, the Bryston BIT brought excellent transparency to the sound, the space between images was darker and the images were also well focused. Resolution improved too, small details became easier to discern. The nuances in a singer’s voice or the vibrato from a violin, for example, were heard more clearly, more distinctly, giving me a greater appreciation of the musicians’ performance. The clean and pristine sound that the Bryston BIT brought on did not come with a cool demeanour or any hardness. In fact, I thought there was a little hint of warmth thrown into the sound and any hard edges were just nicely softened a little bit. The Bryston BIT would probably be a good cure if your system sounded too aggressive, overly bright, or grating to your ears.

I have to say that the Bryston BIT is an excellent power line conditioner. Its isolation transformer provides clean electricity to your equipment at all time so that they can perform at their best, and at the same time it protects your equipment from any nasty stuff that can come in from the power grid.

So, when looking for a power line conditioner, add the Bryston BIT to your shortlist. That is my recommendation.