If you have been following my audio journey, particularly in the last 2 years, more & more Vermouth Audio cables has been slotted in to my system, mostly speaker cables & power cords. I have somewhat shied away from their interconnects since the original Black Pearl RCA interconnects. I did not officially reviewed the item per say, but did have the opportunity to slot it in to my system briefly.

While I revel in the power bass qualities, high level of transparency and overall warmish tonal balance of the Vermouth Audio Black Pearl and Red Velvet speaker cables. My experience when adding the Black Pearl RCA interconnects in to my system, brought about an over warm and just plain soggy sound. Imaging like the chocolate melting in hands even before reaching your mouth, very messy indeed. Vermouth Audio did not make XLR balanced interconnects then.

Now that they do, and with the Red Velvet MK II interconnect, which I’ve not heard, it’s time to give it a go again. The Vermouth arrived in the usual classy, yet functional Vermouth Audio packaging box. Each interconnect(2 to make a pair) is wrapped inside a white cotton bag, which is a nice touch, and a quality test card with serial no. As with all Vermouth Audio products, the custom made connectors are of excellent quality. While most manufacturer uses the garden variety Neutrik XLR plugs, or non-locking Xhadow plugs on some high end cables, Vermouth goes it’s own way, which is truly uncommon practice at all in the entry level products. The custom-ed XLR plugs features textured sand blasted feel on semi gloss black body surface to give that “tactile” finger feel when plugging and unplugging of cable. The locking design closely resembles the Neutrik variety for contact reliability.

I used the 5 meter long XLR Red Velvet MK II in place of my aging Wireworld Eclipse II cable of the same length, between my pre & power amp. Now I was at the tail end of reviewing the ATI 6002 Signature power amp, in which I found the sound to be supremely powerful, well textured but could leave me wanting in terms of high frequency refinement. Not to say that the ATI is rough or ear piercing either, but it’s obviously not in the Mark Levinson league when it comes to refinement.

Now, adding the Vermouth Red Velvet XLR in to the scene does make things better indeed. With it’s smooth and slightly rolled off high frequency response, thick “kau-kau” juicy mids(but no match against the heavenly “KAU” in capitals, Skogrand Tchaikovski, a.k.a. SC Mackarian 421), and that familiar power bass response, the Red Velvet MK II shines intermediately. That’s reviewing lesson 101 for all reading here, sometimes plain ol’ dog shit luck(as Master Shifu would say!) and system synergy will either skew the review in to living hell, or audio nirvana bliss. In this case it’s definitely the latter which saw the excellent synergy between the Red Velvet MK II and the ATI 6002 Signature power amp combo resulting in heavenly bliss for this audio review.

Despite the naturally warm tonal colors & rich timbre that the Red Velvet MK II brings, I was pleasantly surprised by the high level of transparency here. Time and again, all the minor musical details I heard transmitted via the Wireworld Eclipse II, I heard just as much at least, being transmitted by the Red Velvet MK II, and I was expecting a lesser level of performance here from what is essentially a budget cable. The Red Velvet MK II also competed well in the noise floor dept. At least it does not contribute any more noise to what is already residing in the system, or brought along by the recording being play backed. The Red Velvet MK II also maintained it’s powerfully slamming bass, and dynamic sound characteristic that Vermouth Audio has been champion. 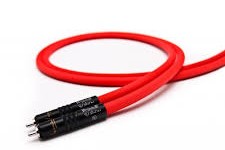 The XLR Red Velvet MK II interconnect retails for just USD335 for a pair if 1.5 meter length, via HiFi-Creations, the local distributor for Vermouth Audio.

Given the depleting level of the Ringgit, the price may likely increase soon too, however despite that the Red Velvet MK II still carries more than enough sound performance to justify it’s value proposition. Highly recommended, as I am certainly keeping my review sample, putting my hard earned $$$ where my recommendation stands.

Vermouth Audio is sold by HiFi-Creations, contact Victor Pheh at 012-2962799 or purchase direct from www.vermouthaudio.com