I’ve always admired Audience cables for their crystal clarity, smooth top end, spacious sound staging, and lastly honesty(a rare commodity these days!). However I’ve also found their sound character to be a little malnourished in the mid range, until the arrival of the AU24 SE series, started to show some meat in that all important vocal range. Like they always said “Not till the fat lady sings!” and I love fat ladies when it comes to my audio system’s vocal performance.  Many of the best female vocalist are fat ladies, think Aretha Franklin, think Ella Fitzgerald, think Maria Cordero, think Mariah Carey today! Ah…. you get the picture.

Back to the Audience AU24 SX series cables. I got a call from John McDonald one day asking if I’ve heard his latest handiwork? I said no, and he told me that I should hear them. The next couple of weeks later, DHL appeared at my door step with a pair of 1.5 meter AU24SX XLR interconnect, a pair of 2.5 meter AU24 SX speaker cables and lastly a pair of AU24 SX speaker jumpers. All arrived in the same generic Audience concert themed box(pictured below), and included with the cables inside the box is a tube of Deoxit contact cleaner and a piece of certificate signed by non other but John McDonald himself. The USD retail prices of Audience AU24 SX series cables as tested are: Out of the box, the build quality of the AU24 SX series cables continues lightly built heritage(NOT to be confused with poorly made), but just nicely finished in grey jacketing and chrome plated for the XLR connectors. The speaker cables are similar in gauge, finished with matching grey jacketing and gold plated banana plugs & spades. The speaker jumpers totally matches the speaker cables in terms of build & finishing quality. The AU24 SX series cables are easy to handle and bend around corners, making cable dressing a joy, unlike some of those super stiff high end cables that are very stubbornly resistant to bending and only at very gentle bending angles allowed. And now most importantly the sound, first I plug in the XLR interconnect between my Bryston BDA-1 DAC & Pass Lab X0.2 pre amp, replacing my trusty Audioquest Sky XLR. I immediately  felt the AU24 SX is a further improvement to the AU24 SE in heard about a year back. The main difference being the AU24 SX is much more airy on the highs, rendering much more spatial cues the AU24 SE could ever muster. Next is the meatier mid range, which gives vocals more body, more “ommph” especially male voices, making it that bit more throaty, which is always a good thing. In the long line of past  Audience AU 24 series cables, some people have commented about the thin bass quality, or a lack of bass volume. I am glad that Audience had rectified this since the AU24 SE. With the current AU24 SX, bass quality is just as bold, and punchy at the same time. Bass lines and note changes are easily followed without any hangover or muddiness to those low rumbles. The greatest strength in the Audience AU24 SX is the way it presents a big wide, open sound stage with lot’s of elbow room between musicians placed within the multi layered stage. There’s so much moisture in the air within the stage, that on some “live” recordings, things got a little foggy in fact! It’s this very so called airiness that separates a 3D musical performance, compared to just another dry run audio system experience! I heard you asked how does it compare to the AQ Sky(a high end fav from the late 90’s)? The Audience AU24 SX just shows how far high end audio cables have marched on in the past 20 years or so. The Audience clearly showed a wider musical bandwidth, particularly in the top end. It’s just as or perhaps, just perhaps quieter in the backgrounds without resorting to battery packs or magic boxes, if those damn things even worked at all!   Only one constant is shared by both the AQ and the Audience, in a sense that both tries to be as tonally neutral as possible. Today the Audience also shows the way, that with the right metallurgy and cable sheilding or braiding methodology, that it is possible to get very neutral sound without resorting to silver strands. Silver(as in the AQ Sky) was once the prized metal when it came to cables, but that time has long been gone. Now days, it’s more about the degrees of alloy in copper, silver, gold, aluminium or even platinum! The alloy metallurgy way had proven to be far more superior than any single metal in multi strand or solid core configuration, by resulting in a more balanced overall sound character presentation. Which leads me back to the Audience AU24 SX. The level of transparency that the AU24 SX presents is well beyond the approach of even much more expensive cables, all big names in the high end cable-dom. Only when a cable is capable of resolving so much details, could produce a sound, and sonic images so realistic to “live performance” as possible. The ability to resolve details in all, if not most of the piano foot pedals of Jenifer Warnes, track “And So It Goes” on The Well CD(still one of my favorite test tracks) goes unmatched by any other cables I’ve heard. Overall, there’s nothing that I didn’t like about the Audience AU24 SX, except for one thing, just one thing that the mid range could just be a little more “kau” thick in plain English, compared to the heavenly Skorgrand Makarian 421. However in all other aspects of sound performance, this Audience could easily just proved to be the clear winner against the cable that cost twice as much? Now if that’s not solid value, I don’t know what is?

Still sticking to the Audience AU24 SX, I move on to replace my Vermouth Black Pearl speaker cable & jumpers with the Audience supplied ones.  The standard spades and banana plugs are easily fitting in to the speaker cable terminal at the back panel of the ATI amplifier and PMC speakers. 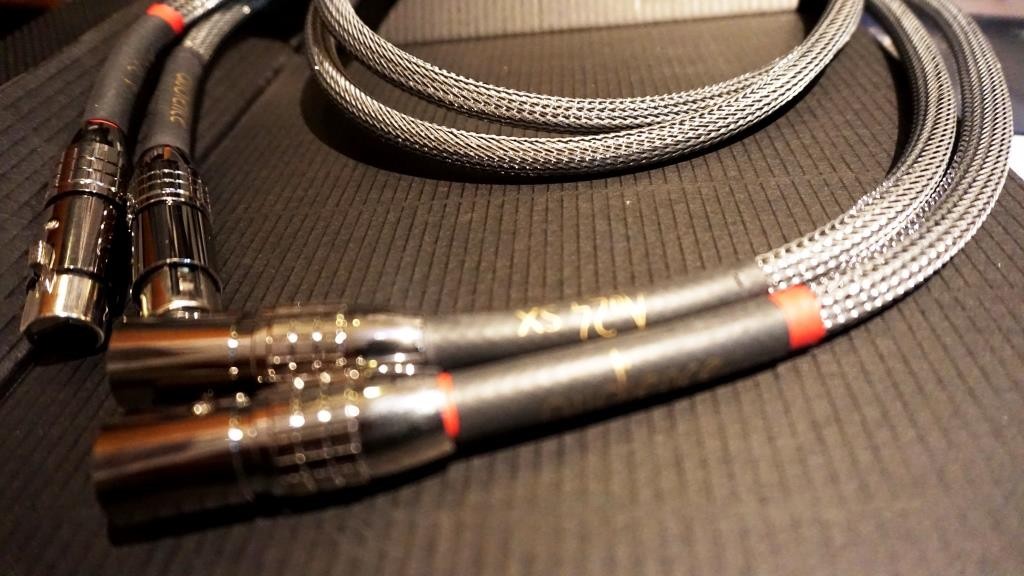 In so many times I tried to go the whole nine yards when it comes to the cable loom theory, i.e. same brand and range cables all the way, I always end up with disappointing sound for one very same reason most of the time. Due to the nature of cable series design, going one part in a particular design will almost always enhanced certain sonic traits while losing others. And by adding to the cable loom, only enhances “those” very certain sonic traits even more, to the point of tipping the system synergy balance, becoming more like an overdose of sorts, losing too much neutrality, which ultimately leads me to the direction which I do NOT want to achieve in my hifi journey. So far, I can say almost all cable brands I’ve tried are guilty of this trait. I said almost all but Audience!

Plugging the AU24 SX speaker cables & jumpers in, I expected things to be overdosing as usual, but the Audience proved otherwise. Yes, the speaker cables does have much of the same neutral sonic character as the XLR interconnect, but it did not do enough to spoil the whole musical broth. The sound remains just as constant, if just a slightly darker in the sound staging, which is a good thing, I would say, bringing about a more enveloping 3D-ness in the sound staging and imaging properties. Highs are just as airy in density and the top end became even smoother and more enticing to these ears. I found myself listening to lots of orchestral music just to hear the crystal clear timbre, crisp high frequency tingle of the triangle, with a hard strike “tinggg…………….” slowly decaying into the fluffy, thin air of nothingness, but just time & space, before the next “tinggg…………” hits again! This is feels even more pleasurable than the fluffy part of the ear candling exercise. It just reminds me of those heavenly angels spreading lovely flower petals down to earth, and turns even the hardest man to soft as marsh mellow!

The Absolute Sound calls these Audience AU24 SX cables “The Musical Insider” in their recent top product Awards for 2016, and I wholly agree with them on this count, which is indeed not a natural regular occurrence! If you do not want to use cables as audio tone controls, the Audience AU24 SX are the way to go. They are tonally neutral, natural sounding & easy on the ear, bring very little of their own foot print in to the system synergy landscape and best of all, they do not quite cost an arm of a leg to buy just yet. Get them now before John McDonald decides to change his pricing policy to mirror those of his competitors! I am keeping the Audience AU24 SX in my system.

There are currently no distributors in Malaysia for Audience products just yet, should you be interested to get more information about the AU24 SX or other Audience products, kindly email to John McDonald at [email protected]